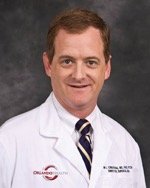 Dr. Cheatham graduated from Stanford University with a Bachelor of Science with Departmental Honors in 1985. He completed medical school at the Vanderbilt University School of Medicine in 1989 and completed his General Surgery Residency training as well as a two-year Surgical Critical Care Fellowship at Vanderbilt University Medical Center in 1996. Dr. Cheatham has been on the faculty of the Department of Surgical Education at Orlando Health since 1996 and holds faculty appointments at the University of Florida, Florida State University, and University of Central Florida. He is board-certified in both general surgery (with added qualifications in surgical critical care) and neurologic critical care.

Dr. Cheatham has published over 200 abstracts, manuscripts, and book chapters. His research interests include the cardiopulmonary effects of increased intra-abdominal and intrathoracic pressure, the use of advanced hemodynamic monitoring in critical illness, management and closure of the open abdomen, and the long-term health effects of abdominal decompression. Dr. Cheatham is Past-President of the World Society of the Abdominal Compartment Syndrome (WSACS).

For over 30 years, he has been active in medical missions and international disaster relief through Samaritan’s Purse / World Medical Mission and has worked in Africa, Asia, and South America. He serves on the Board of Directors for both Samaritan’s Purse and the Billy Graham Evangelistic Association.

Dr. Cheatham and his fellow trauma surgeons were actively involved in the response to the Orlando Pulse Nightclub tragedy on June 12, 2016, the second deadliest mass shooting in United States history.

Because of the high demand and limited space, this event is only open to members of MD-ACS. If you have not yet joined MD-ACS and would like to do so, click here.

Registration fees will be refunded (less $25 processing fee) upon written notice received 72 hours prior to the meeting. Cancellations with less than 72 hours notice will not be refunded. Substitution for registrants is permitted.

Click here if you need to cancel your registration or provide a substitute.